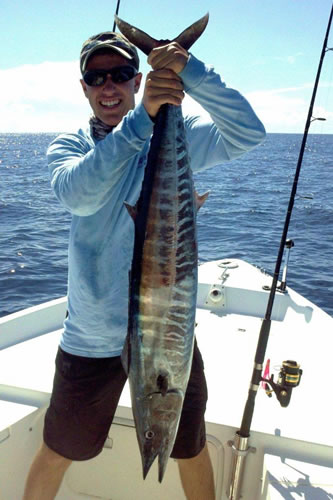 My crew this week was Logan Delvecchio (14 yrs) and Jonathan Bressman (8yrs). The boys helped rig the rods and gear the night before and were in the driveway at 6:00 am. We cleared the inlet at 6:45 am to a cloudy sky and choppy sea conditions. The waves were much less than the forecasted 8 seconds. We trudged on out and since it was slow going dropped over two lures. Did not take long and we had a Bonita double. A few more Bonita and we finally saw some weeds out in 275 feet and dropped in the Ballyhoo. I usually troll south to avoid ending up in another time zone, but noticed a bird to the North and headed that way. We were not the first boat on this line and had traffic coming from both directions. As soon as we got all four line in the water the first Dolphin was on. Solo bull dolphin in the box and it was only 7:24 am. We trolled another 30-40 minutes and then peeled off to head further east in search of a better line holding fish. We found some scattered weeds out in 500 ft and dropped in. The water temp was a really hot 87 degrees! Earlier the temp in 275 was 83 degrees ? No bites and no birds so we trolled back in to my BFT numbers near Push Button Hill.

We spotted a bird working hard to our north and head over to see what he was on. We made one pass then turned back south when one of the spinners started screaming. I am thinking big BFT perhaps even bigger than the 12 lb one we got last Friday. Logan has the rod and Jonathan and I are clearing lines. The line was screaming the whole time and Logan tries to palm the spool to slow the fish down..... ouch that's hot..... Logan learned his first physics lesson on heat from friction. I am watching the spool and we are well into the #15 mono backing, which means this fish just ripped off 300 yards of 30# braid.

The fish finally stops and we quarter back and start gaining line. As Logan is bringing this fish in I was just praying it's not a monster Bonita. When we see color ....I can't believe my eyes as I am looking at a 4 ft Wahoo hooked to 5/0 hook tied to a 40# mono leader. I gaff it on the first swing and we have Wahoo in the box!

Jonathan caught another Dolphin a little later and few more Bonita and we headed in around noon. 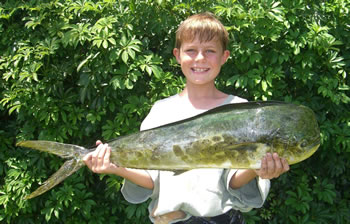